Whether or not you enjoy John’s pop music, there’s one thing for sure – he can seriously play electric guitar!  I am a fan of John’s blues playing and I really enjoy the John Mayer Trio album as well as the Continuum album. 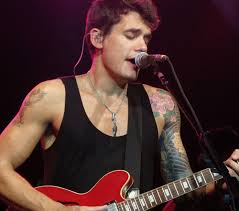 If you haven’t heard him rip on the guitar check out one of my favorite John Mayer guitar solos from a Reggae cover version of “Ain’t no Sunshine”.  John is playing his Gibson ES-335 on this particular clip.  Even though the video is low quality, the guitar playing is amazing.

John Mayer shows us his first American Fender Stratocaster and explains the story about how he paid for it.

John Mayer Instructional Guitar Video.  In this video John explains how moving the same lick around can vary up the tones achieved by playing the same lick in a different spot and the challenge that goes along with trying to do so.

Mayer in the studio taking a look at some of his pedal collection.  Mayer says he’s “somewhat of a collector”.

This next video is the full live tour rig for John Mayer.  They go through all his amps, cabinets, guitars, pedals and more.  It goes to show how much goes on behind the scenes for some artists, while other guys can just go out with a guitar, amp and none/very few pedals.   John has a signature Two-Rock amplifier that was made in a limited run.  If you’re after something similar, check out the Two-Rock amps with 6L6 tubes for that fat, round and warm low end.  Get ready to cough up some bucks because they ain’t cheap!

I hope this post gives you an insight into the amount of gear John not only owns, but uses live.